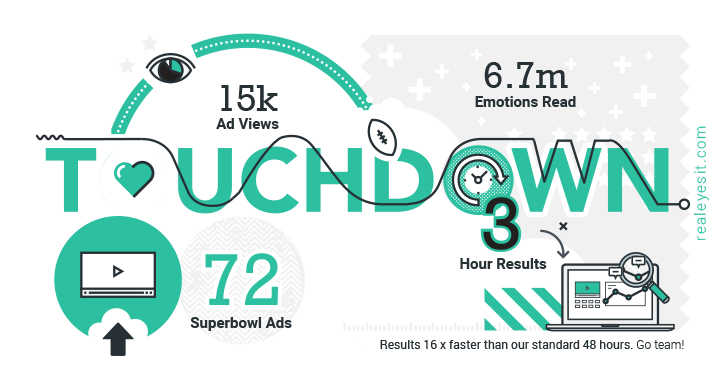 Like a lot of the US, we at Realeyes were glued to our screens on Super Bowl Sunday – but it wasn’t for the game. It was so we could collect every ad shown during the game and test people’s emotional responses to them.

We partnered with data providers Lucid and insights platform Qualtrics to bring you the definitive ranking of the most emotionally engaging ads of #SuperBowl50. Using Lucid’s Fulcrum unit, we tested 72 ads on over 3000 people in the US in record time.

The Realeyes platform measures how people feel while they watch video content online. People share access to their webcams for the duration of the video, and their facial expressions are tracked, processed and analysed in the cloud. Results appear on our online dashboard in near real-time.

Speed being of the essence to avoid general Superbowl fatigue, we drew on the full scale of Lucid’s access to consumer data for the fastest turnover. We collected over 15000 views and analysed 6.7 million frames in just three hours – enough data to create reliable reports on all 72 ads.

And the winner is….

Doritos chose to run not one but two user-generated contenders for the last year of their ‘Crash the Superbowl’ campaign – both made it into our Top 10. But while ‘Dogs’ is entertaining but gentle, with a group of pets trying to raid a store, ‘Ultrasound’ is the more divisive offering. It drew mixed reactions and plenty of attention online ahead of the game, but it ultimately seems to have paid off. It pipped Marmot’s ‘Love the Outside’to the post, scoring better than 99% of the ads in our database.


This year’s worst ad was Colgate’s #EveryDropCounts, which only scored an EmotionAll3 and was a whopping 78% worse than Doritos’ winner – worse even than Xifaxan’s walking bowels and the ad about opiod-induced constipation. Although a valiant effort with an important message, the ad lacked impact and fell flat. Some may argue that the Superbowl is not the place for PSAs, but Budweiser’s own ‘don’t drink and drive’ message, #GiveADamn, broke into the Top 20. A string of insults aimed at drink drivers delivered by Helen Mirren appears more emotionally engaging - perhaps it's the accent.

Film trailers, no matter how highly anticipated, weren’t able to break into the top 20. The highest scoring trailer is the Jungle Book at slot 25, and perhaps surprisingly, a fair few made it into the bottom scorers.

The top 10 this year may be dominated by animals and celebrities, but things get more interesting lower down. See how your favourite ad scored out of the full 2016 Super Bowl rankings.
Test your next video and see how it compares to competitors within your category.