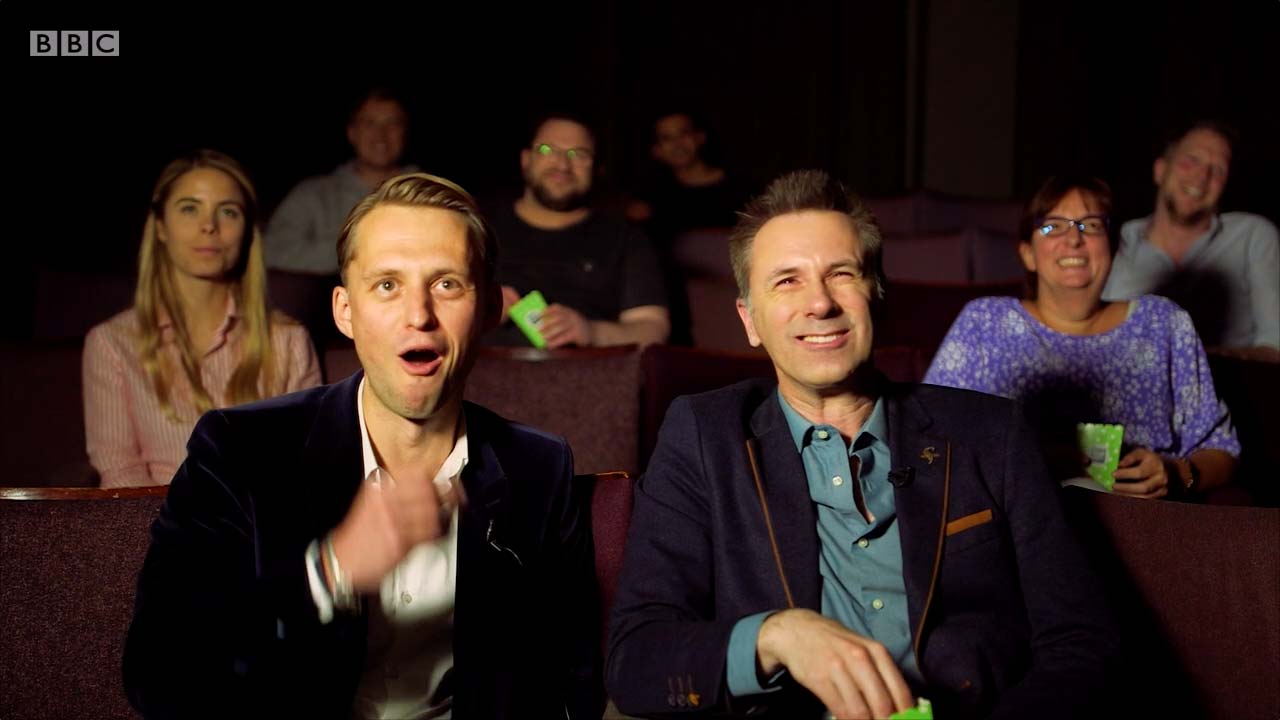 Finding something decent to watch on the telly can be challenging. But while channel-hopping the seemingly endless array of boring reality shows, cooking features and programmes showing people watching other programmes you occasionally stumble upon genuine TV gold. 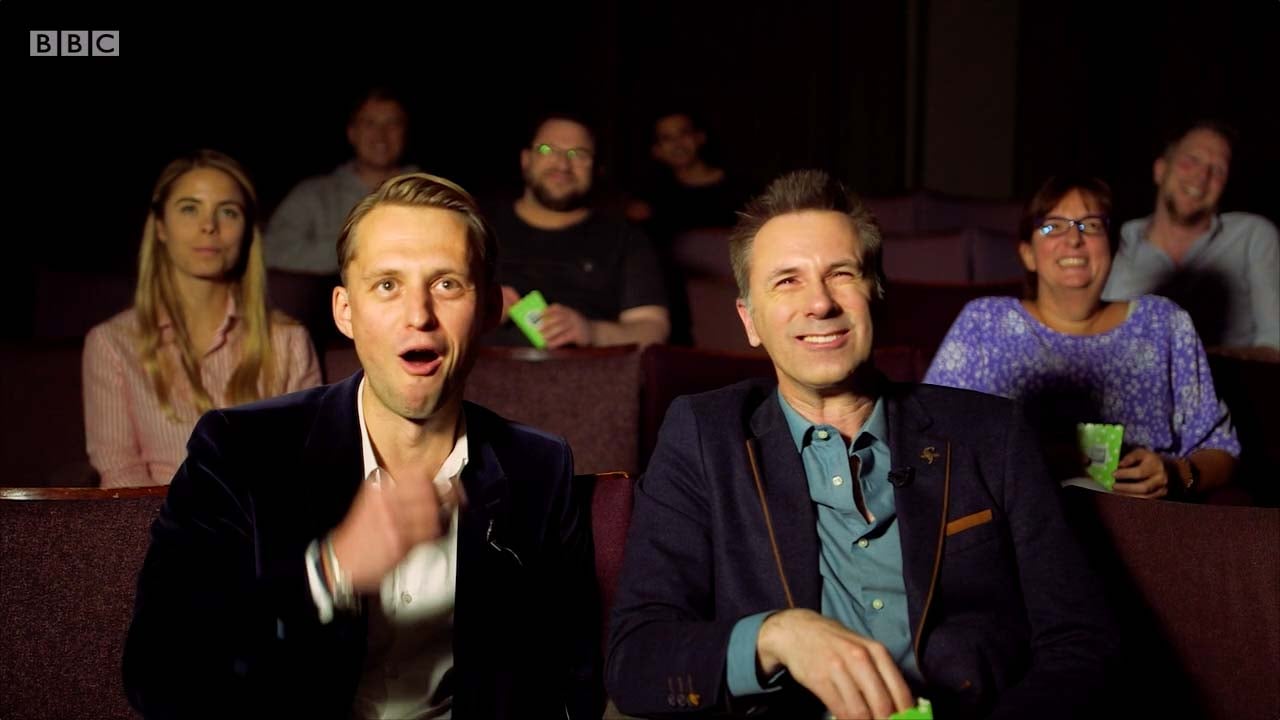 From Del Boy’s hilarious bar fall in Only Fools And Horses to the uncomfortable rollercoaster ride of seeing iguanas being chased by hungry snakes – these incredible moments have delighted, inspired and left people open-mouthed for years.

But just what makes a TV moment stand head and shoulders above the rest? What is it in their emotional DNA that make them so memorable? Well, using our pioneering AI tech to measure viewers’ emotional reactions, we sat down with BBC Click presenter Spencer Kelly in our office mini cinema to look at some of the most loved TV moments of all time in more detail. > See Full BBC Click Episode

So, sit back, grab some popcorn and enjoy!

Only Fools & Horses – 'Falling Through the Bar'

This scene was nominated in the UK TV Gold Top 40 Greatest Only Fools Moments in December 2006. It was also named the 7th Greatest Television Moment of all time in a 1999 Channel 4 poll, beating the likes of John F. Kennedy's assassination, the Queen's Coronation and Winston Churchill's funeral. The scene is from the BBC sitcom Only Fools and Horses episode “Yuppie Love”, originally aired in January 1989 - at the height of the age of the ruthless corporate high-fliers of Wall Street. The protagonist Del-boy has adopted a new ‘yuppie’ image, donning red braces, raincoat, briefcase and Filofax. Del leans against a bar flap, moves away as he tries to impress two women from across the bistro, he casually leans back, unaware that the bartender has just lifted up the flap and he promptly falls to the floor. The Happiness metric immediately spikes as his mate, Trigger does a double-take wondering where Del has disappeared. 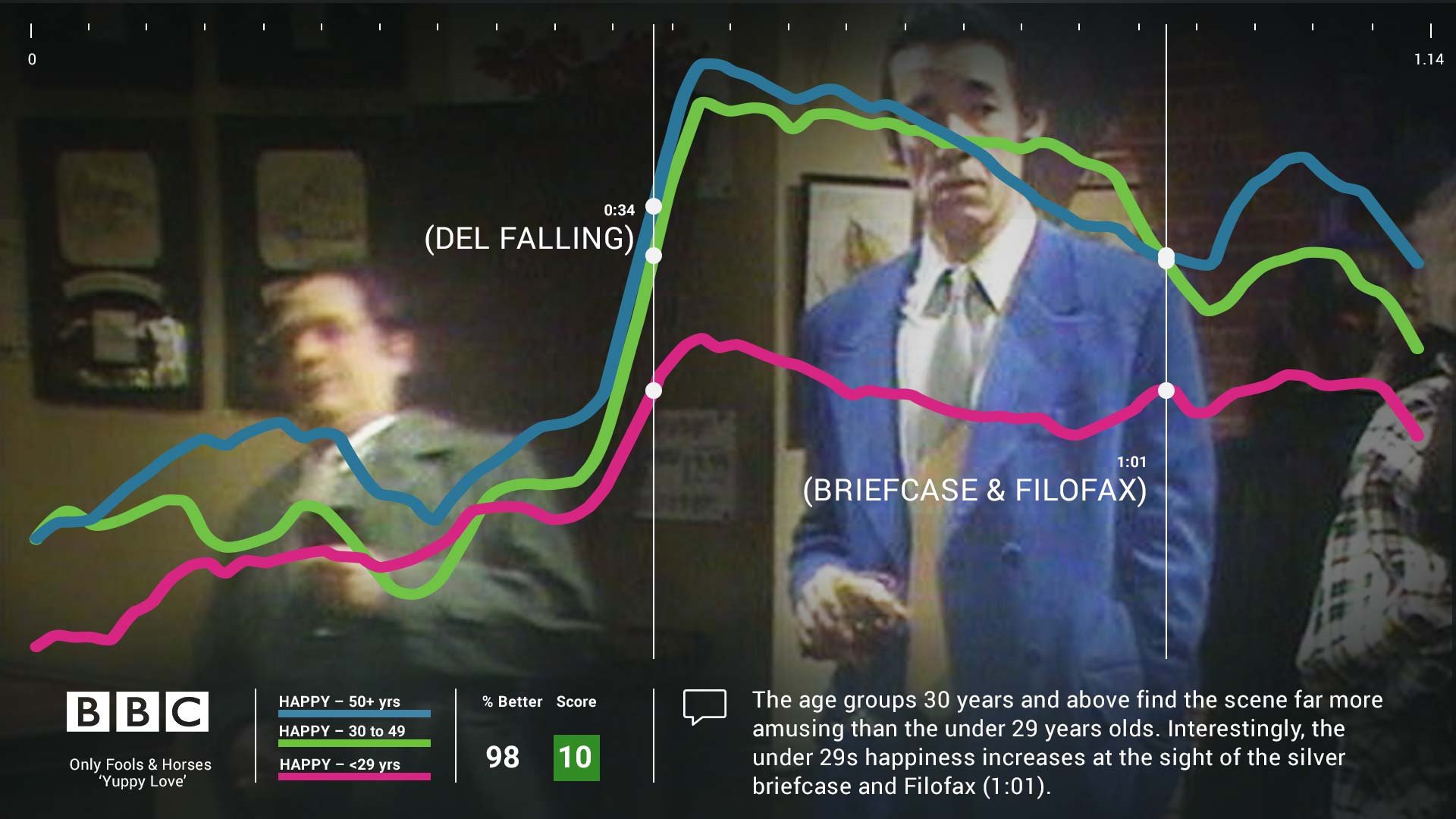 Note how the age groups 30 years and above find the scene far more amusing than the under 29-year-olds. Interestingly, the under 29-year-olds' level of happiness increases at the sight of the silver briefcase and Filofax, “Drink up, we’re leaving!”, whereas the older group isn’t affected in the same way. Additionally, there is a dip in Happiness from the over-30s at the sight of the two women, whereas the under-29s' Happiness increases. Edited like an action sequence from a Hollywood blockbuster, the hungry snakes are interpreted as villains and the newborn iguana as the hero. “This will blow your mind,” says dailymotion of BBC’s Planet Earth II’s ‘Iguana vs Snakes’ scene that presents the animals as characters. 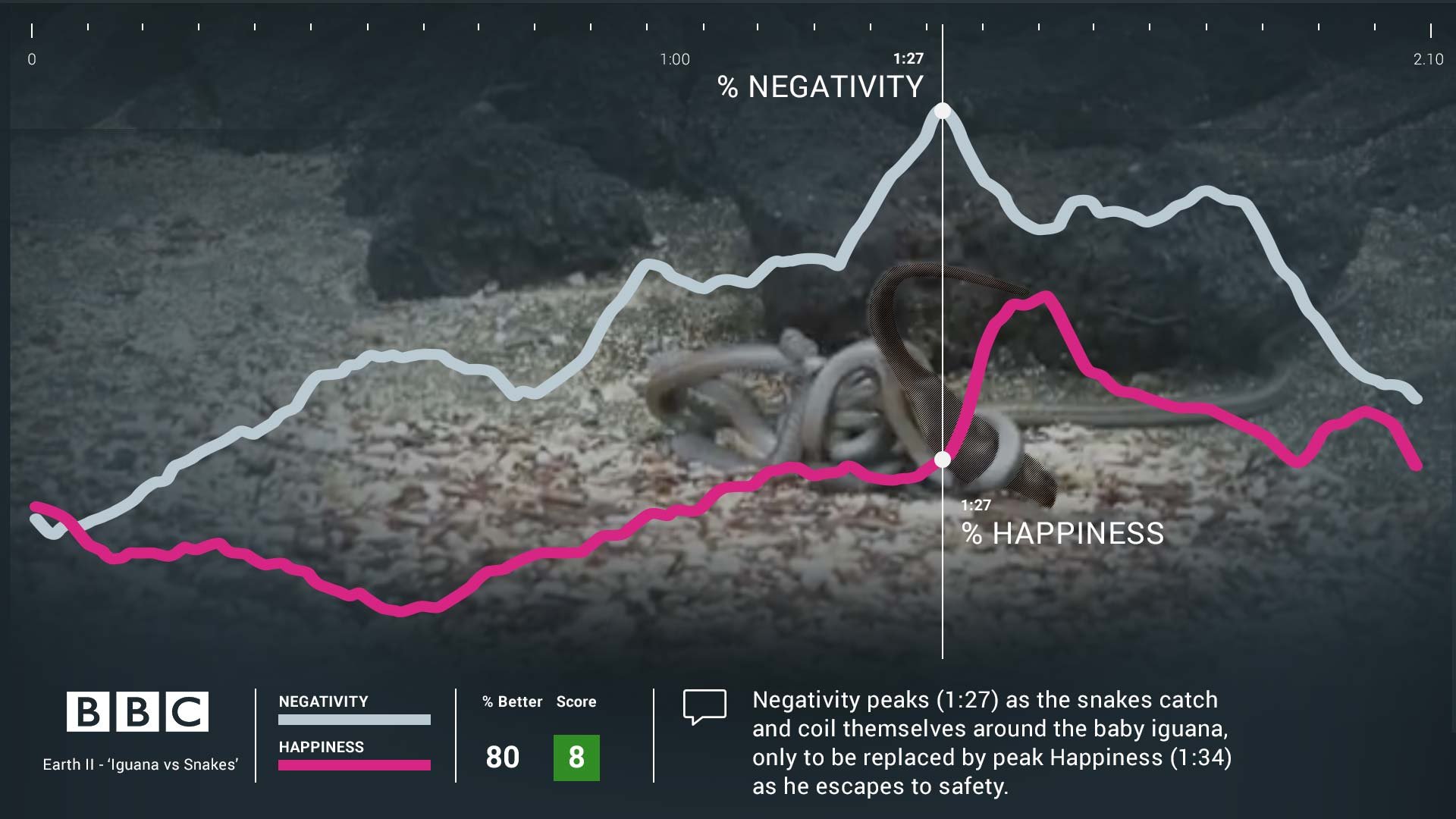 At 60 seconds in we see that Surprise peaks (1:06) as the motionless iguana suddenly sprints away from the snake. Engagement builds rapidly, seeing Negativity peak (1:27) as the snakes catch and coil themselves around the baby iguana only to be replaced by peak Happiness (1:34) as he escapes to safety. Narrated by Sir David Attenborough, the scene concludes with “a near miraculous escape”. An unlocked door gives way to a hilarious moment on live TV, where BBC reporter Prof. Robert E. Kelly was being interviewed about South Korea when his daughter entered his home office to photobomb the interview, shortly followed by a baby in its activity walker. The panicked mother then bursts into the room to try and salvage the situation. The contrast between Prof. Kelly trying to remain composed against the domestic chaos in the background only adds to the hilarity. Note the extra boost of Happiness (0:35) as the mother crawls on the floor to close the door behind her.

So how do you make TV gold, well, that's the million dollar question, but it's clear that using pivotal moments can help dial up audience emotions that takes them on a journey. Whether it's tension that resolves or the build that helps pack the punchline, emotions are key to engagement. Knowing how your audience feels enables you to maximise your content, whether it's where to edit, know who responds best or whether it has the desired effect in the first place. Optimising your content and getting it to the right people means that this time next year Rodders...