Moz the monster - far from frightful... but not delightful

Colin Pye
The wait is over! John Lewis’s festive offer is being beamed into the living rooms of the nation tonight.


There’s going to be plenty of chatter this weekend about whether Moz the Monster is better than Buster the Boxer or Monty the Penguin, but our scientific approachmeasured how 300 viewers felt as they watched Moz kick off the festive season. We didn’t ask the viewers if they liked it. We recorded their emotional responses using facial coding via webcam - determining their subconscious emotional reaction.

Moz the Monster scored 7 out of 10. > View Results

Let’s take a look at the EmotionAll® scores of John Lewis Christmas ads from 2011 to 2017. Engagement and Happy suddenly peak as the boy laughs at Moz’s flatulence. Then there’s a slow decline in Engagement as the relationship between the boy and Moz is established further up until the football match scene.

The sleep deprived boy takes the audience engagement to it’s lowest point before it pivots back.

The second split in gender engagement, where mean are more engaged with the disheveled present wrapped in brown paper.

Happy drops and negative rises as the boy waves goodbye to Moz. Engagement continues to peak all the way to the end as the brand is revealed with a click of the light switch. 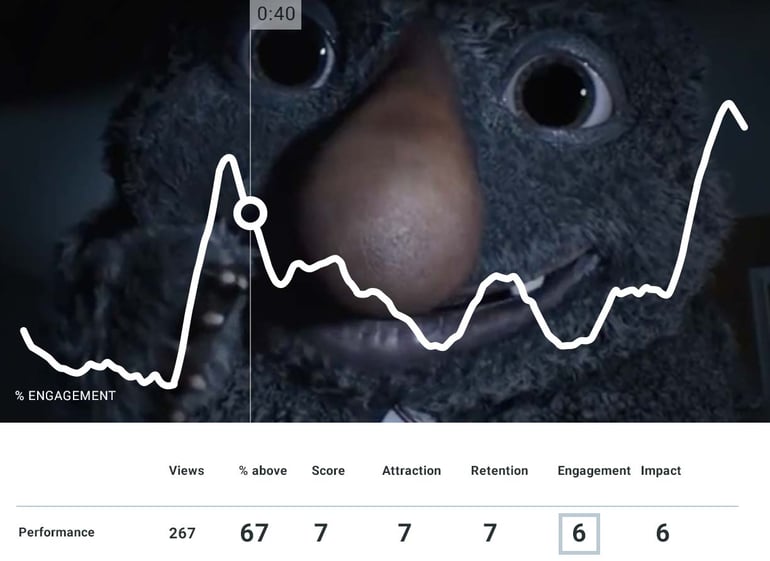 Whether you love Moz or not, Realeyes showed this add to 300 viewers in the UK. Their emotions say that this is a good ad, but by the high standards of John Lewis, Moz is one of the least emotionally engaging ads since the department store heralded the start of Christmas seven years ago.

The test is one of fifty-five Christmas videos watched by 3,330 viewers, run in partnership with audience platform LUCID.