If you have some thick skin and a sense of humour, "We’re Here for You” is a brilliant viral video that netted over half a million YouTube views and generated dozens of press articles as of this writing.

The first 25 seconds are a parody of generic COVID-19 ads extolling clichés like “in these times of uncertainty” and “longing for a sense of normalcy.” The video then abruptly switches gears into a montage of profanity and curb-side roasting from Wiener’s Circle staff.

It’s a hilarious way to spend 74 seconds...if you can make it through the first 24.

According to a Realeyes July 2020 facial coding study, the predicted audience retention dropped from 100% in second one, to 47% at second 5, 26% at second 10, and 16% at second 15. Realeyes’ audience retention models are calibrated to accurately predict in-market video ad performance. The serious COVID-19 video ad style was convincing, and most viewers tuned out, as many have done recently. For viewers that hung on, their focus abruptly jumped at second 25 from highly distracted to highly engaged. Attention sustained and peaks coincided with humorous insults and one-liners until the end.

Additionally, second 25 is when levels of both positive and negative emotions spiked, with several peaks occurring through the remainder of the video. 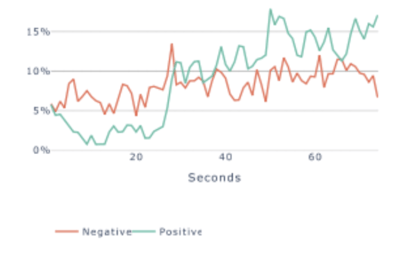 While the overall video was bold and contained highly engaging moments that captured attention, the long 25-secoond set-up contributed to early audience decay and prevented a large percent of viewers from experiencing the complete brand message. That also means a majority of the original audience faild to experience the video’s significant emotional peaks and valleys in the second half, which fuel brand equity metrics like recall and social sharing.

There is no debating that the edgy video achieved significant viral success by capturing the attention of news media and many social sharers. However, the early audience decay begs the question: Could a great video have been even greater with a narrative that cut to the chase and introduced the emotion-generating content sooner? Indeed, most digital video ads struggle to retain audience even past 30 seconds, let alone 74. Only a test would tell.

The video had a Realeyes Quality Score of 3, a composite metric from 1-10, which factors in best practices for high-performing video ads: the time to first distraction; the audience retention by second 15; and the attention potential indicated by attentiveness and emotional peaks. Realeyes measures naturally occurring human response using front-facing cameras as opt-in viewers watch the ads from their PCs, laptops, mobile phones and tablets. This study included an average of 177 participant viewers. (See definitions below.)