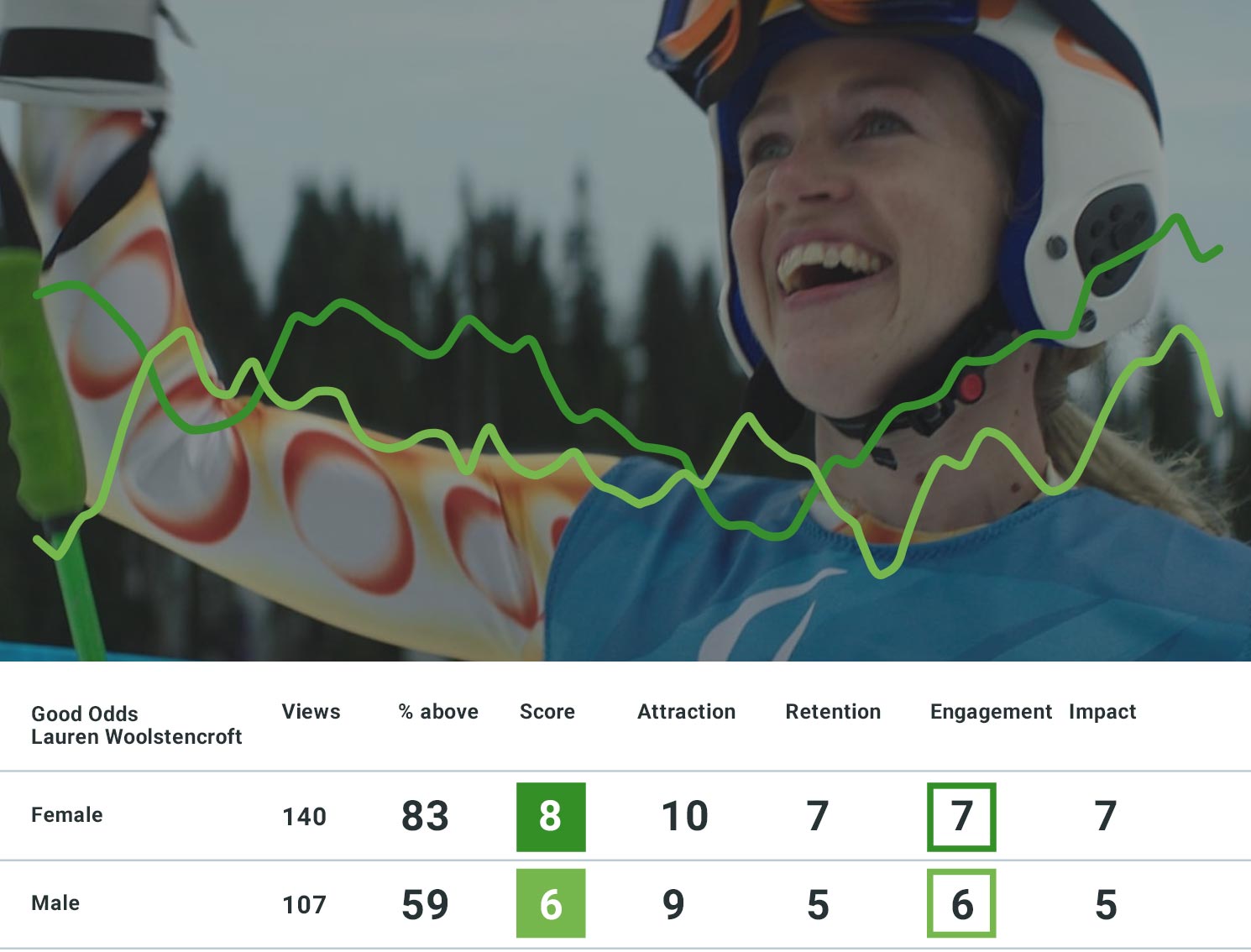 What makes a successful Olympics ad

The Olympic Games is a celebration of strength, spirit, and achievement. As the world watched the opening ceremony of the XXIII Olympic Winter Games in Pyeongchang, Realeyes have tested some of the Olympics commercials that highlight the extraordinary things that athletes accomplish. 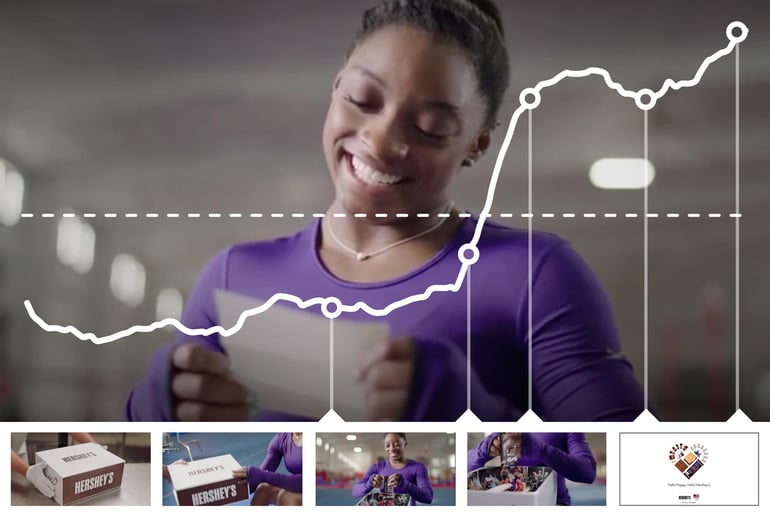 The strongest Olympic ad we’ve ever tested is Hello from Home with Simone Biles by Hershey’s, created by Arnold Worldwide. It's an intimate story of the Olympic gymnastics champion, demonstrating the importance of athletes feeling connected by their family while preparing for the tournament. The spot highlights notes written by family and friends wrapped up in a Hershey bar presented in a Hershey branded box – see how the engagement trace suddenly soars as Simone opens the box and wells with positive emotion. The ad scored nine on the EmotionAll® score, placing it in the top 7% of all ads in our database.

A tale of girl power featuring Mikaela Shiffrin and her motto Always Be Faster Than The Boys seems to hit the bull’s eye - it receives a very enthusiastic response from women in particular, gaining a 9 on the EmotionAll® score. Men are not that excited giving it a modest 5.  As a result, the ad scores 7 being better than 73% of the ads. 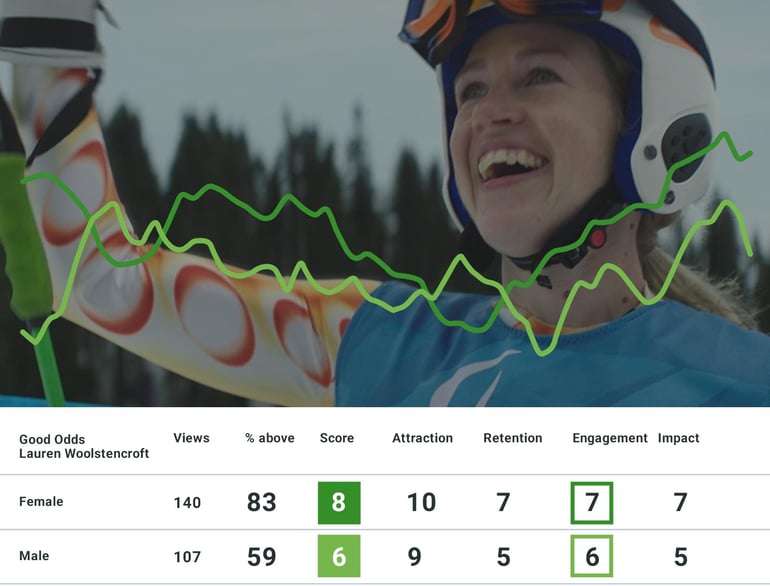 Good Odds featuring Lauren Woolstencroft is a journey of remarkable perseverance – from a child born with a physical disability to a powerful woman and eight time Gold medal winner.  Viewers engage with the story, which is expressed in consistent numbers across attraction, retention, engagement, and impact. Women engage with the story more, gaining an EmotionAll® score of 8.

The story of Olympic skier Lindsey Vonn was retold as it was during the Super Bowl LII. Alicia Keys'  anthemic “Girl on Fire” plays the soundtrack to Vonn's traumatic setbacks and triumphant comeback.

Lots of historical footage is edited to tell the tale of her skiing accident (broken back and torn ligaments) before Sochi Olympics in 2014, represented in the first big dip in audience engagement.

The second drop sees Vonn struggling in her hospital bed with her leg in a cast. This dramatic setback in life also effected the trajectory of audience emotion, a mix of negative and positive emotion never quite rebounding to a significant end peak. However the life scars are left for montages of training and glamorous photoshoots achieving a resilient EmotionAll® score of 7. 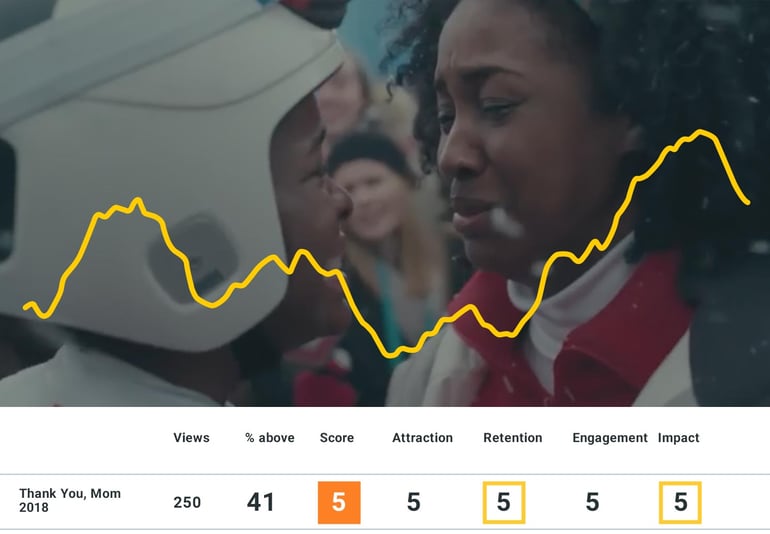 Two of the three P&G ads are high performers, gaining 7 and an 8 on the EmotionAll® score. However, the most recent ad didn’t receive the same response.. Despite following a similar structure to the other two, the 90 second video by Weiden + Kennedy features moms supporting their kids achieving their sporting ambitions despite battling biases over color, religion, disability or sexual orientation. A melancholic soundtrack of “Ooh Child (Things Are Gonna Get Easier),” adds poignancy and elevates the strap line, “Imagine if the world could see what a mom sees.”

The Happiness trace shows how audience emotion reflect the negative challenges that these children were facing and despite a heartwarming payoff with a peak of happiness. Proctor & Gamble reveals it's array of brands just at the peak of happiness - maximising the emotion to good effect but overall, the recovery was hard won. A mix of positive and neagtive emotion created greate narrative tension, but perhaps for too long.